Apparently this weekend was the 25th MTA held at Jamestown. I guess after making a big fuss for the 400th Anniversary, celebrating a 25th seemed kinda eh. But it was cool to see the variety of camps and troops. I hadn't seen the grand parade before, so I played paparazzi a bit on Sunday towards the end of the day. 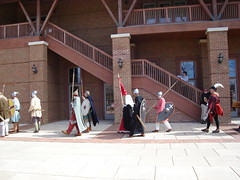 After all the stress of ramping up and surviving the 400th, it was nice to be a bit more laid back. Lara, the new fort manager, asked us what we wanted to do and let us have our ease. Since Sandy's mom was in the Barracks, it seemed a bit crowded on Saturday, so I spent time knitting on my Tudor stocking outside the Buttery to draw folks in, checked on Dexter doing medical demos in the Gov's house to spell him a bit, and pretty much bounced around. I did have a small triumph in that the apricot almond custard needed to be removed from the Dutch Oven while Sandy and Carla were out looking at the sutlers and it was just Diane and myself. So, I managed to lift the pie plate out without cracking and dropping anything, and also without burning myself. Hooray! The food that was made on Saturday was extremely yummy and even sustained us some into Sunday.

Sunday was a smaller staff, so I worked with Jennie and Lara in the Barracks cooking simple pottages. I was able to take a few breaks and visit with others, drool over Eadric's pottery, chat with the nice folks of Grey's Company, buy the last of the amazing Canadian's knives (although I still need to arrange payment), and at Alan's direction, bought a nice chafing dish and pitcher so Alan can start doing period coffee preparation at events instead of using the camp stove and metal coffeepot. Yes ladies, I was asked to buy more pottery. Force my hand...

Alan and I exited the fort around 4:30pm, changed and got on the road home. We didn't encounter much traffic since we took 301 home to avoid the stretch of hell between Fredericksburg and Springfield, but we were dogged tired when we did get home. I've got an aching neck and sore feets, and Alan has an aching shoulder from a pinched nerve in his neck that he's visiting the chiropractor for. We've survived James Fort yet again, to play another weekend.
Collapse