This Saturday was the Free Scholar/White Scarf gathering at Kit's place. There were over 30 fighters in attendance, and while I only took some pictures, laughed at some of the bouts, and got to hang out with friends before and after, here are a few photos of the day. 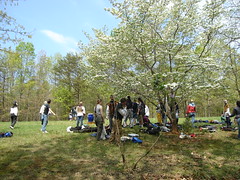 I did stay up until 3am both nights for a little chatty time with 'Nar and Christian, which could have been predicted.

I've spent much of my time spranging in order to practice and have some nice examples to share this weekend at the Sheep and Wool Fest.

This is the red wool sprang pouch I made on Tuesday: 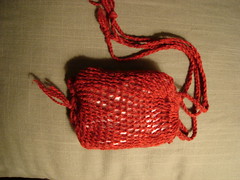 On Thursday night I warped up some natural gray hand-spun wool Kymber gave me a while back, and attempted some different twist patterns in this piece. Unfortunately, the wool was very sticky and while clearing the shed was a bit tough, making sure to only grab what was intended was tougher. So it is neither polished nor pretty, but a learning experience. 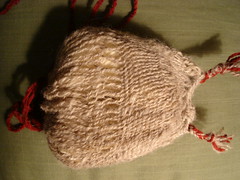 After the trial of the gray wool, I then decided to try a small plain cream fisherman's wool bag. Alas, the chunk of wool I reeled off was riddled with worn places, and instead of just trashing it/ using it for stuffing or something else, I tied knots and tried to work with it. So I have another small lumpy piece with uneven patterning. pitiful, but completed on Saturday. 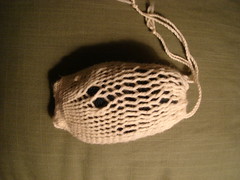 Finally, I warped up a piece of more of the cream fisherman's wool, along with some in a peach color that I had dyed with pokeberries a while ago, in order to try another bag of sprang with Coptic twined patterning. Luckily I paused on Saturday night when I was getting too tired, and finished the rest of the piece on Sunday afternoon. Someone said it looked like a dreamsicle, which I will take as a compliment. 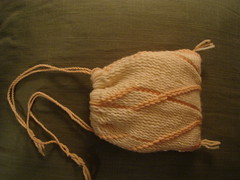 So that was fun, but I would like a successful piece of the twist patterned sprang, like the Danish Bronze Age cap. Must try that this week. I also love the pattern idea in Collingwood's Sprang book on making mittens, so that looks like fun to try as well.
Collapse