I must apologize to

vom_schwarzwald as I took some pictures at the Pas this weekend, but certainly not lots. I was having far too good a time watching the fighting and enjoying good company to remember to pick up the camera all the time. I did take some though, and they can be seen on my flickr account, linked from this picture of Alan and Balen (?) fighting. 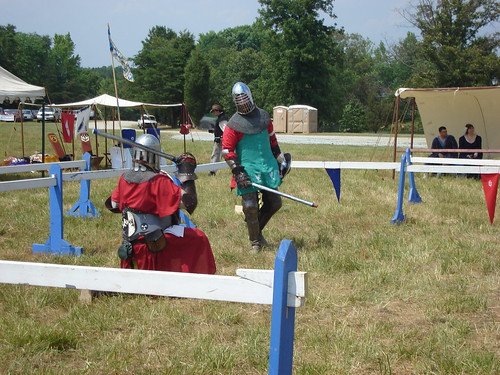 The weather was honestly a bit warmer than we'd have hoped, but luckily there was a fair breeze which helped. The field was well decorated and held by the defenders of the day. Many great fights were witnessed, friends enjoyed each other's company, good folks were recognized by Their Excellencies in court, and the feast prepared by Mistress Clare was obviously a gift from the gods and reward for a hot day and grueling fights, as it was delicious in every way. I weep for those who missed this feast, and did bring a baggie of cookies home, which are disappearing at an astonishing rate. Freddy and Alyce kindly took Alan back to the hotel, so I could spend some time with

theodorad enjoying the bardic that followed feast. The fighters were rightfully tired at the end of the day, and crashed easily with a belly full of tasty food. Those of us who were largely decorative during the day could be considered dangerous when bored/ untasked at events. But Theo and I managed to make several lengths of trim, and I also got to chat with

Sunday morning, Alan let us sleep in until 9am, and then we were up and on the road homeward not too long after. Alan and I planned to stop at Kahill's in South Hill, VA for brunch on our way home. Man, those crab and bacon omelets were wonderful, and made for a very worthy pause in our journey home to eat in luxury in the light breeze of a warm but not hot day on the deck. We made it home by 3:30pm, and had the truck unpacked and stuff mostly cleaned up and put away an hour later, to enjoy a quiet evening at home watching some episodes of ROME season 2 in the basement.
Collapse