On January 31st I received the yellow yarn from Plimoth to start work on a pair of knit Tudor Stockings for the Colonial Wardrobe department, and went out to purchase the correct size needles.
On October 7th around 12:30am the second sock was completed. I still have to sew in some of the ends and block them, but the knitting on them is complete. I was so close to finishing last night, that despite the wisdom of going to bed at a reasonable time, I stayed up until almost 1am to finish and sew in some ends before I gave up. Pictures coming later.

Obviously I did not work on them continuously these 8 months, but played with them more in fits and starts. I finished the first stocking in June around the Pas of the Mysterious Forest, and that blissfully demystified the heel for me thus pushing me on to work on the second sock. They are not without some small mistakes (mostly around the heel that I noticed late) but they will do the job, keep the costumed interpreters feet/legs warm, and when the feet wear out, someone far more talented than I can knit on new and improved feet. And, now thanks to Plimoth for the pattern and yarn to play with, I've completed a pair of knit stockings. This makes me inordinately pleased as I've had serious heel-fear and up until now have only knitted rectangles, tubes, or cones (garters, bags and hats.)

Now to think about a set of stockings for Alan or myself!
(if only I didn't feel sniffly and feverish...)

Socks are currently drying before I can model them and ship them off to Plimoth. 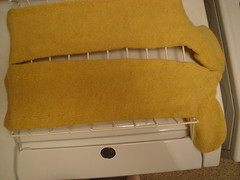