Tonight I need to knuckle down and seriously make my Halloween costume for Friday. I'm also trying to decide if I should temporarily dye my hair darker for the occasion or not. Tuesday night might require a visit to JoAnn's for some small accessories before practice to complete the ensemble. I'm so excited but need to get it done. I meant to play in the sewing room on my costume yesterday after I got home, but instead I succumbed to a nap and the embroidery. My fingertips were a little numb when I went to bed from playing with the embroidery, but they have thankfully recovered.

I had a blast at St. Luke's Artisan Fair on Saturday, even if I was extremely late in arriving. I was a couple of hours late in getting up and leaving the house, and then I got stuck in some traffic on 95 just before the 295 exit around Richmond, locking me in. The plus side of traffic is that I was able to drive with my knees and braid my hair during the creeping up to the accident site. I had also forgot to pack an Acorn, but luckily I remembered looking at the map on Friday night, so I got there just fine. As soon as I checked in and was getting dressed I wished I had brought Roman. It was really freaking warm in the hall, despite being the end of October. But I got dressed, found many wonderful friends, partook of the day-board, since I was starving, and sat to chat.

I've uploaded the pictures I took, though I did not manage to photograph everything, and have to declare my favorite to be Team Cheese. 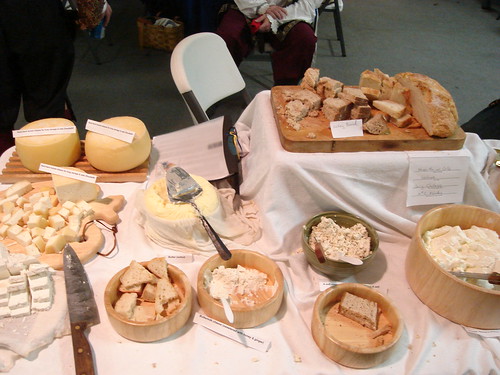 Vitha put together a very compelling display, and it was darn tasty too. The depth and breadth shown was very impressive.  I even took the plunge and tried the liquid whey and the buttermilk, in addition to all of the cheeses offered. She had 5 cheeses available, some pressed whey, fresh butter, and whey bread. It was awesome. The cheese press made by Marcellus and Arghylle was frosting on the cupcake, and really made it a wonderful comprehensive display.

I also really liked Sophia's food display, and declare the spinach tarts my favorites, but the sauce for the pork was also full of nom. I grabbed one of the booklets of recipes to flip through and then I will likely give it to

theodorad  and try to encourage her to try some of them for a tasting panel to include myself. :) I also seized upon the opportunity to flip through her pre-view copy of Patterns of Fashion 4 at the end of the day (THANK YOU

mmcnealy !) and was surprisingly able to keep all salivation in my mouth and off the book. *drool* I wanted before, and now I seriously WANT!

tattycat 's chocolate display of great intensity, as well as other only in Spain topics. Yum, um wow, need more of that whipped cream from the day-board and more water. Truly wonderful and she demonstrated great knowledge of the subject. I loved Mariana's casting display to include samples of cast tokens, buttons, etc. as well as the carved moulds on display. That was amazing. I am also a fan of

orlacarey 's dolls.  Then I had fun visiting the various embroidery samplers on display with

belfebe  and being amazed at the quality, variety and research presented. Janina's was lovely and impressively meticulous.

I also had a grand time showing off my pin cushion to anyone interested (and likely some not) as well as the pretty GST threads and my current project of a panel for my MIL (the center pink is almost complete now). I also was finally able to wear my hand-sewn shift with my petticoat bodies, which made me pleased, if a bit warm. Of course I've now got plans swimming in my head of an embroidered shift like the one in the V&A with the pink creatures all over it... the problem with successful artisan fairs is the bevy of inspiration afterward with only the same amount of time on hand.

Since Gracie was a little done, and the Moore's were my hosts for the evening, we boogied out a little early and headed to the Lone Star for dinner. The food was tasty, Gracie was charming and the company was fabulous. And then we were joined by John, Deedee and Amanda which only improved the evening, not to mention a peacock and peahen sighting. About an hour and a half later the kids were done and we punched out in a hurry counting ourselves lucky and extremely well fed. Then I had

bdeb 's entertaining company on the ride back to their place, and we stayed up chatting and enjoying each others company until after midnight when it was crashy time. Morning came and there was more playing with Gracie and drinking the wonderful Diet Coke of great happiness, and hanging out some more before I got on the road home and left the hospitable Moore's to the rest of their day.