Took a couple of days to go to the Needlework Conference at Winterthur this Friday and Saturday. My sweetie agreed to it as an early birthday present. He's awesome. I also got to see the With Cunning Needle exhibit of four centuries of needlework in conjunction with the conference. Particularly interesting, in addition to the jacket, coif and forehead cloth, were the design transfer kit, the early 17th cent sweet bag and knife sheath, the early 18th cent darning stitch sampler, and the mid to late 18th cent Queen's Stitch purse and garters. You can see them in the Gallery Guide which is available online. (BTW if you see my name on the second to last page as a supporter, that is thanks to everyone who purchased a pewter bird and/or butterfly that I forwarded the funds onto either Plimoth Plantation or Winterthur depending on which state the jacket was in. Thanks Y'all! If I had thought that they'd publish it in the guide, I'd have been clearer on the source of the donations.) 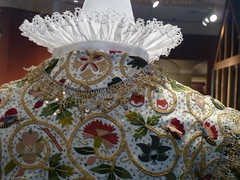 snailstichr who were also there!

The lectures were really wonderful. It doesn't matter how often I hear Tricia speak on the jacket project and research, I always learn something new. I took notes on each one that I'll see if I can later type in and make sense of for those interested. I almost filled up my neat little blank book from the Costume Gallery at Platt Hall with the grapevine child sized jacket on the cover. I also made it into two workshops. One was in the Conservation department on Up Close and Personal: Conservation and Historic Needlework where we saw some of the textiles behind the scenes and listened to the conservator talk about techniques used on and plans to work on certain pieces either on the table or currently on display. The other was the Tiny Turtle Thimble Pouch of amazing cuteness! That was fun, and should be fun to finish.

And now it has gotten very late, so I need to head to bed. I'll try to be better at updating, especially since I have pictures to share, notes to type up, etc.

It was a great time and hopefully has re-kindled my fire and motivation to stitch. As well as another new project I have to pursue and finish before Twelfth Night.
Collapse