So this evening, being the first night of Hanukkah, I decided to try and make latkes for dinner. To the internets for a recipe, Luckily I had potatoes on hand, but they were an assortment of fingerlings including some blue and pink ones. And they were a bit of a pain to use on the grater, tore up my nails though they needed a trim anyway. Not having peanut oil on hand, I had to use vegetable oil. I also didn't add enough salt up front, but the shaker at the table was good enough. 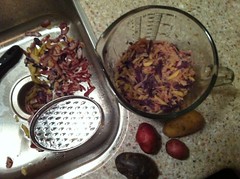 Prep was pretty messy, as was the frying process. But it was interesting and worked, and the results were pretty tasty. Since we didn't have sour cream or applesauce on hand, nor did I have the time to make applesauce in time for dinner, I heated up some Aidell's chicken and apple sausages and had some of Mom's apple butter to make it a dinner. 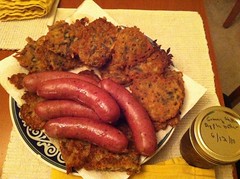 Yum! But probably won't be a regular dish.
Collapse